How Our Pets Guide Us To Presence & Healing 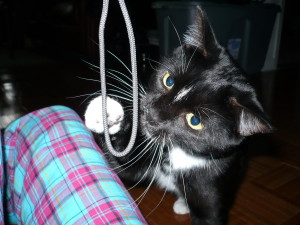 Writing will probably always be my preferred method of processing healing. My whole world shifted when I got back into a regular practice a few years ago. I wrote this piece of my heart a couple years back about one my favorite spiritual guides, the adorable furry guy pictured above. Absolutely every being has a message for us, this was his message for me…

Whenever anyone asked me if I had a pet growing up, I would hesitate to respond.

My parents told my sister and I that we were moving from Long Island, NY to Boca Raton, FL in 1992. I was 9 and I wasn’t happy about it.

The woods in the backyard where I played in the snow and collected salamanders were replaced with a perfectly manicured golf course and way too much humidity for my liking.

To further embrace the South Floridian spirit (and because of my father’s severe allergies to most animals) we got an African Grey baby parrot named Sandy. Alex, another wickedly intelligent African Grey followed. Then came the cockatoos: Jessie, Julie, and Nikki. Tommy, the severe macaw, came last.

They had their own room near the garage where they watched the Home Shopping Network or Food Network playing on an old television mounted on the wall for their entertainment. When they weren’t in their room, they’d hang out on perches in the family room or break free from their cages and wander the house squawking to themselves. They weren’t exactly the types of pets you could snuggle up with on the sofa, but they had their charming moments.

Still, I didn’t fully understand the value of adopting an animal until an ex introduced me to his cat, Brad, an extraordinarily sweet 3 year-old tuxedo cat with chronic sinusitis due to an upper respiratory virus he was infected with as a kitten.

I’d never seen an animal sneeze and cough as much as this one, so I was naturally alarmed when I witnessed his first asthma attack after they came to live with me in 2007. It took some adjustment, but eventually I learned to understand the chronic nature of Brad’s issues, and stopped freaking out every time he sniffled. According to the vet, there’s no reason he shouldn’t live a happy normal life, he’ll just experience some discomfort, colds, and allergies when the virus flares.

Though the relationship ended with my ex, my time with Brad continued when we decided he would stay with me. It’s been 7 years, many infections, viruses, and allergies later, but he’s still as loving and vibrant as ever, albeit congested. When I look at him resting peacefully on the couch, attempting to breathe through his nose, with little success, he reminds me of the importance of will and perspective.

In Brad’s world, this is the only life he knows, so he spends his time relaxing and showing ridiculous amounts of love and affection to anyone who pets him, though this doesn’t exempt you from getting sneezed on at times(sorry to those of you who have, he can’t help it!). Even on the bad days when his virus is really flaring and he wakes up wheezing, coughing, teary-eyed, and unable to smell his own food or eat it, he still shows love.

Brad teaches me how to get through chronic physical challenges with surrender rather than fighting the pain. His sinuses may be clogged, but that’s only a small part of how he experiences his days. Most days, he’s happy just to be here, play with a string, or knock random objects off tables.

It’s a simple life, but it’s all he needs.

Now, I see the key to overcoming each of my days can be found in that same simplicity.

Even if it’s been a week since I’ve left my bed and symptoms are flaring, I still have a choice over how I perceive that week. I have access to the world via this laptop, books, films, and a myriad of articles, along with the time to educate myself on all the subjects I’d always wanted to know more about.

While my body lies still, my mind expands-and that brings me the same kind of joy I see in Brad’s watery eyes when he bats at that string as excited as the first time he saw it.

by: Jamie Rautenberg I had the pleasure of recently being interviewed by the awesome Leanne Vogel from Healthful Pursuit o...

by: Jamie Rautenberg Refusal to admit or honestly express that we're angry does not mean we're a gentle person, it means w...

by: Jamie Rautenberg I continue to live in a daily process of strengthening my will in order to examine all the ways I've di...

by: Jamie Rautenberg This is a time where the majority of the world is experiencing heightened sensations of terror to a t...

by: Jamie Rautenberg I don't know many people who don't have some form of their teenage self affecting them at this very m...

by: Jamie Rautenberg One important topic that arises along the healing path for many individuals with chronic pain, illnes...

by: Jamie Rautenberg If our personal boundaries got violated at some point or repeatedly & intensely enough in our lif...

How Constantly Seeking Mental Understanding Can Disconnect Us from Healing

by: Jamie Rautenberg When we're completely alone, during that moment before a choice to act, there's no escaping the truth...

by: Jamie Rautenberg Many of us try to mentally understand our feelings instead of actually experiencing them, especially ...

Sharing Perspectives vs. Being an Authority

by: Jamie Rautenberg It's been a little while since I've connected with you for several reasons. Mostly, I've been reviewi...